From the Wall Street Journal’s national baseball writer, the captivating story of the home run boom, following a group of players who rose from obscurity to stardom and the rogue swing coaches who helped them usher the game into a new age.

Swing Kings is both a rollicking history of baseball’s recent past and a deeply reported, character-driven account of a battle between opponents as old as time: old and new, change and stasis, the establishment and those who break from it. Jared Diamond has written a masterful chronicle of America’s pastime at the crossroads.

JARED DIAMOND has been the national baseball writer for the Wall Street Journal since 2017. Prior to that, he spent a season as the Journal’s Yankees beat writer and three seasons as their Mets beat writer. In his current role, he leads the newspaper’s baseball coverage. This is his first book. 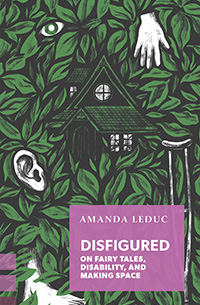 If every disabled character is mocked and mistreated, how does the Beast ever imagine a happily-ever-after? Amanda Leduc looks at fairy tales from the Brothers Grimm to Disney, showing us how they influence our expectations and behaviour and linking the quest for disability rights to new kinds of stories that celebrate difference.

Amanda Leduc is a disabled writer and author of the non-fiction book DISFIGURED: ON FAIRY TALES, DISABILITY, AND MAKING SPACE (Coach House Books, 2020) and the novel THE MIRACLES OF ORDINARY MEN (2013, ECW Press). Her next novel, THE CENTAUR’S WIFE, is forthcoming from Random House Canada in the spring of 2021. She has cerebral palsy and lives in Hamilton, Ontario, Canada, where she works as the Communications Coordinator for the Festival of Literary Diversity (FOLD), Canada’s first festival for diverse authors and stories.