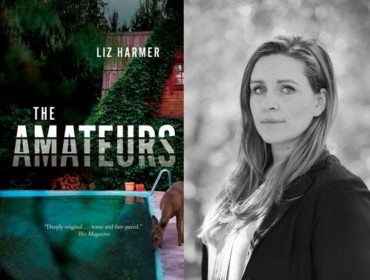 “The Amateurs” is a speculative novel of rapture and romance in the vein of Margaret Atwood’s The Year of the Flood and Tom Perotta’s The Leftovers. In the near future, the world’s largest tech company unveils the “Port”, a personal time travel device. It becomes a phenomenon. But soon it is clear that those who pass through its portal won’t be coming back–either unwilling to return or, more ominously, unable to do so.

After a few short years, the population plummets. A small group of the one percent still remain in the present, having been left trying to rebuild a very lonely and dwindling world.

Liz Harmer is a Canadian writer living in Southern California with her many pets, three children, and philosopher husband. Her stories, essays, and poems have appeared or are forthcoming in the Walrus, Image Journal, the Globe and Mail, The Malahat Review, Lit Hub, and elsewhere. In 2014 she won gold in Personal Journalism at the National Magazine awards, after being awarded the Constance Rooke Award for Creative Nonfiction. In 2018 she was a finalist for the Journey Prize as well as appearing in Best Canadian Stories. Her debut novel, The Amateurs, released in 2018 with Knopf Canada, was a finalist for the Amazon Canada First Novel Award.